Some functions may require the device to be rebooted before the changes take effect. 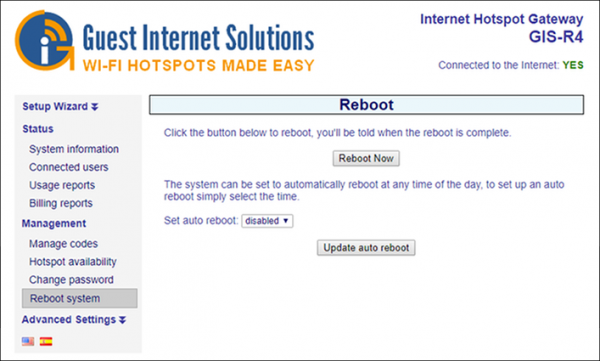 Click on the 'Reboot now' button to restart the device.

When the device has been rebooted there will be a pause of approximately three minutes before it becomes functional again. This process is the same as cycling the power to the device.

The reboot page also has a drop down menu for ‘set auto reboot’.

The drop down menu permits a time to be selected to reboot the device each day.
The auto-reboot should be selected for a time of day when no one will be using the hotspot.

The auto reboot is very useful to release resources allocated by users. For example, IP’s will be allocated and will only expire after the termination of the IP lease time. The auto reboot forces the release of IP leases to free up resources for new users.